“Terra Maïre” is a unique duo of a cappella singers. Two surprising voices, emanating from the same source – those of Marie-Ange and Beatritz, mother and daughter – with a common heredity and a common repertoire, rooted in the South of France, in the regions of Rouergue, the Basque Country and the Bearn.

In 1996 Beatritz and Marie-Ange decided to embark on a pilgrimage back to their roots.  Though mother and daughter, they have very separate personalities and artistic backgrounds. This diversity gave them the energy and ability to breathe life back into the secular songs of the land of their ancestors. These songs – prayers, laments, psalms – "chevrotés" or “sung in a quavering voice” by men and women who have gone before them and most of whom have disappeared, make up a unique heritage, a timeless tradition in danger of extinction. 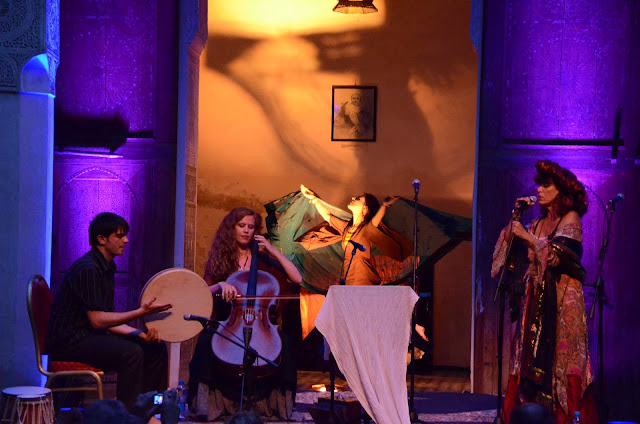 In the intertwined voices of “Terra-Maïre” - “Mother Earth” in the Occitan language -  their arises a world of essential emotions, that tread the fine line between the sacred and sorcery. These are medieval and sacred melodies in Occitan, language of troubadours and Cathars.

At Dar Adyel tonight Terra Maïre wove musical magic - producing ancient ghostly melodies that filled the night air. Their voices were ethereal, other-worldly and hypnotic. All performers on stage were barefoot and the symbolism was entirely appropriate - this was music that connected you from the earth under your feet, through your body and lifted your entire being to the skies above.

While one would sing a drone, a single constant pitch, slowly shifting her vowels to create unexpected textures, the other's sorrowful melodies took off from this grounding and wandered through the aural space. They alternated these roles until coming upon a moment at which they broke the pattern and sang lines in thirds, bringing surprise as well as harmonic closure to the pieces.

Also in harmony this evening was the lighting - a mix of ecclesiastical purple and pagan orange achieving just the right mix of heavenly sorcery. This was especially effective when Beatrice began to dance behind the stage, her swirling robes of Indian silk casting shadow images of a faery spirit, spinning and floating in a swirl of mysticism.

The participation of talented cello player Claire Menguy, drummer Frederic Cavallin on the tabla and bandir, accompaniment by Anass Habib and the plaintive tones of the Indian Shruti box all contributed to giving the performance the intensity of an initiatory experience.

This is not the first appearance in Fez for Terra Maïre and Fez music lovers will remember the delightful concert at Le Jardin Des Biehn in June 2011. Tonight was for them and for us - a welcome return.

I am not sure where you're getting your information, but great topic. I needs to spend some time learning more or understanding more. Thanks for excellent info I was looking for this information for my mission.
Feel free to surf my webpage ... manchester united transfer news 2009

If some one needs to be updated with most up-to-date technologies
afterward he must be go to see this web site and be up to date all the time.


Feel free to surf to my web page :: Mulberry Outlet

After going over a handful of the blog articles on your site, I honestly appreciate
your way of writing a blog. I saved it to my bookmark website
list and will be checking back soon. Take a look at my web site
too and let me know your opinion.

Feel free to surf to my web-site; Louis Vuitton Purses

Do you have a spam issue on this site; I also am a blogger, and I was wondering your situation;
many of us have developed some nice procedures and we are looking to trade solutions with others,
why not shoot me an email if interested.

My family always say that I am wasting my time here at net, however I know I am getting know-how everyday by reading thes pleasant articles or reviews.

Feel free to surf to my site: Duckwater rosacea specialist

Howdy! I could have sworn I've been to this website before but after reading through some of the post I realized it's
new to me. Nonetheless, I'm definitely happy I found it and I'll be book-marking and checking back frequently!

This is really interesting, You are a very skilled blogger.
I have joined your rss feed and look forward to seeking more of your great post.
Also, I've shared your website in my social networks!

With havin so much written content do you ever run into any problems of plagorism or copyright infringement?
My blog has a lot of unique content I've either authored myself or outsourced but it seems a lot of it is popping it up all over the internet without my permission. Do you know any techniques to help reduce content from being ripped off? I'd genuinely appreciate it.

Do you mind if I quote a couple of your articles as long as I provide
credit and sources back to your webpage? My blog site is in the very
same niche as yours and my visitors would definitely benefit from
some of the information you present here.
Please let me know if this okay with you. Regards!

Hi there i am kavin, its my first time to commenting anyplace, when i read this piece of
writing i thought i could also make comment due to this good post.

Thanks in support of sharing such a nice thinking, article is good, thats why i have read it completely

Verƴ niϲe post. I simply stumbled uρоn your
blog аnd wished to mention that I have really loveɗ suгfing
around your weblog posts. After all I will be subscribing for your rss feed and I am hoρing you write again soon!

Great post. I used to be checking continuously this weblog and I'm impressed!

Very useful info particularly the last phase :
) I handle such info a lot. I used to be looking for this certain information for a long time.

Thank you and best of luck.

Here is my homepage: Thermo Extreme


My spouse and I stumbled over here different web page and thought I should check things out. I like what I see so i am just following you. Look forward to exploring your web page yet again. hotmail email sign in